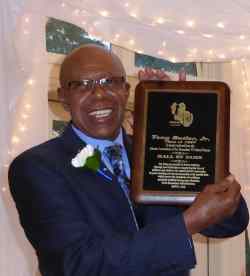 Tony Butler, Jr. is being inducted into the Hall of Fame for his dedication to improving the lives of children and adults in the capital district community, through his teaching and entrepreneurship in the martial arts.

Tony is a graduate of Van Rensselaer High School, Class of 1967. In high school he excelled in sports, playing varsity baseball, basketball and track. His senior year, he received the “Best All Around Athlete “award. Upon graduating from high school Tony worked as a mason and at Amtrak until his retirement in 2015. While doing so, he has devoted his life to studying and mastering martial arts and working in and sponsoring youth programs to teach children, youth and adults. In 1994 Tony founded his own AAU affiliated martial arts karate school called the American Institute of Japanese Karate which began as a youth program to teach children integrity, discipline and a sense of self-worth. Tony ‘s teaching ethic is to instill the importance of "effort, learning and bouncing back from mistakes". Tony has received numerous awards from the City and County of Rensselaer including: “The Board of Public Safety City” or “Rensselaer” Award, The Capital Region Community “R.J. Manning” Award, The “Public Safety” Award commending “Shihan (meaning instructor or sensei) Tony Butler, Jr. upon his many years of dedicated service”, and a Proclamation commending Shihan Tony Butler, Jr. on receiving the “Capital Region Humanitarian” award. Among his other career accolades, Tony has received the “Certificate of Achievement” from the Governor's Office, the “Community Awareness Martin Luther King Award”, the “NAACP Certificate of Commendation”, the “NYS Congress of Parents and Teachers” award, and the “Outstanding Service” award from the National AAU Karate Committee. Tony has volunteered his time to referee, coach, officiate and assist at all AAU events and he has provided scholarships to students wishing to learn martial arts. He was also the past president of the Capital Region AAU basketball league, has been an AAU basketball coach, a CYO girls’ basketball coach and an assistant coach for Holy Names Varsity basketball. In addition to heading his own dojo (training place or school), Tony has served as the Director of the Albany County Karate Program for over 25 years and under Albany County District Attorney David Soares’ “Fighting and Building Hope” campaign, through an anti-bullying program called “Words”. Rensselaer County officials are currently working with Tony to bring a similar program back to Rensselaer and the county. For over 50 years Tony has been a leader in the Capital District inspiring and contributing to the lives of countless citizens as a professional, teacher, coach, mentor and friend.

Tony was nominated by 2015 Hall of Famer, colleague Michael Stammel ’73 and his neighbor Karen Garhartt ’72. Tony married his high school sweetheart, Linda Emery, class of 1969 and they raised three daughters Joann, Claudia and Angela, all whom attended Rensselaer City Schools. He has lived in the City of Rensselaer all his life.