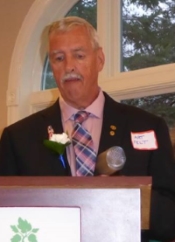 Arthur Felt is being inducted into the Hall of Fame for his service in the military and for volunteering in veterans’ programs.

Arthur is an alumnus of the class of 1967. Art was drafted into the army in 1968 serving during the Viet Nam Era until 1970. After training, he received a diploma with the Army Engineer School, as a Powerman and continued in Engineer School receiving another diploma in Precise Power Generation, both in 1968. He finished out his active duty in Mannheim Germany, did two years active reserve service and another two of inactive reserve. He studied at Hudson Valley Community College and received an Associate in Applied Science Degree in Marketing in 1972. In 2011 he received a diploma from the American Legion College of New York, and graduated from the American Legion College, Department of New York, SUNY Morrisville for completion of the American Legion Extension Institute course. Art is a past Legion Post Commander at the Gerald O’Neil Post in Rensselaer and is currently their board President. Part of those duties included participating in services for deceased veterans, helping to organize the Memorial Day Parade and was part of the parade color guard. He was Grand Marshall in last year’s parade. Art also volunteers for veterans at the post and at the Veterans’ Administration Hospital in Albany. On the county level, Art attends functions and conventions for veterans and is a past Vice Commander and POW/MIA coordinator.

Aside from his work with the army and veterans, Art also had a 30 yr. Career with the U.S. Postal Service. His civilian volunteer work includes a lifetime membership in the J.N. Ring Fire company in the city, holding the offices of past President, past Captain and past Financial Secretary. He also belongs to the Fraternal Order of the Eagles in Rensselaer.

Arthur was nominated by his wife Patricia. They live in Eastland Park.