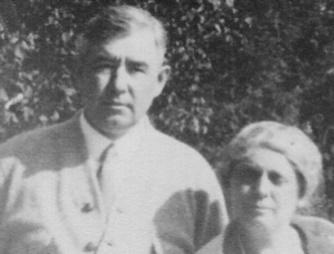 G. Arthur & Marie Lee Hall are being posthumously inducted in to the Hall of Fame for completing their higher education at the turn of the century and for their major roll at the Methodist Church and in the community, through the Masonic Temple.

Both Marie Lee and G. Arthur attended the fourth class in the history of the Rensselaer School system., graduating from Grammar School in 1898 and from High School in 1902. Marie was valedictorian and Art was salutatorian and both were honor students. After high school they were married. They settled in Rensselaer, living on Hillview Ave. eventually and became active members of the Methodist Church on Washington St. Marie took classes and got a teaching certificate, becoming one of the first teachers in the school system. Art started his career as a cashier at the old Lansing’s Grocery in Rensselaer eventually becoming a supervisor in the U.S. Postal Service Albany Department of Money Orders. It was an important position, as the world’s economy was in flux and money orders weren’t issued by banks. Art was a top ranking official in the Masonic Temple. He also was a preacher, on the board and a trustee and Superintendent of the Sunday school for 33 yrs.in the Methodist Church on Washington St.

Art and Marie were posthumously nominated by their great great niece, Lynne Beiermeister’69. They lived into the 1940’s and rest in peace in the Greenbush cemetery. They had no children of their own, but lots of them in Sunday School and the class room.