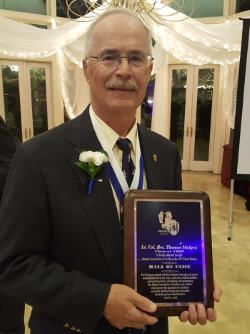 Lt. Col. Ret. Thomas Mulyca is being inducted into the Hall of Fame for his career accomplishments in the Army, and his technical abilities and volunteerism in developing and maintaining the Alumni Association’s data base and website.

Tom attended Fort Crailo and Van Rensselaer HS. When his music abilities playing the trombone where discovered the band director asked him to be in the High School band, while still at Fort Crailo in Junior High. He was a band officer his junior and senior year and participated in NYSSMA competitions when the band won the highest achievement the state awards, a 6A. He was also in the Dance Band and played in the NY Student Orchestra at Union College. Tom was active in the Drama, Ski, Varsity and Key Clubs, was on the Prom Committee junior year, Intramural Bowling and was on the Volleyball team. He was Student Council Representative for 3 years and represented the school at the Mock UN Meeting at SUNY. He was also in National Honor Society. Tom has the distinction of being the school’s first student to attend the US Military Academy at West Point.

Tom graduated from West Point in 1973 and was commissioned in the army and served for 20 years. He also married that year. His first placement was as a lieutenant at Fort Bragg, NC in a field artillery unit after which he moved up to work for the elite US Army John F. Kennedy Special Warfare Center where he was a Logistics Officer and Company Commander in the Institute Battalion. While there he was awarded an Army Commendation medal for streamlining procedures, training personnel and forecasting logistics demand. Tom developed a passion for automation and attended the Finance Officers’ school in Indianapolis, IN, preparing him for his next position as Finance Officer. In 1977, Tom became a Captain and commanded the 78th Finance Office in Germany and served as Disbursing Officer as part of the US Treasury where he was responsible for $38 million. He made many changes while in this position, leading to his next position of Systems Analyst for the Communications and Electronics Command at Fort Monmouth, NJ. While there he reduced processing time by 90% and reduced the cost of accounting by 50%. Onward, Tom was promoted to Major and was assigned to work at West Point in 1984, supervising a 96-person civilian workforce. This led to a position in the Long-Range Planning team at West Point when automation and computer usage was exploding.

Always on the move, the Mulycas’ next assignment was in So. Korea as the Inspector General for the Camp Humphreys military community, where in 1988, linking the operation to the internet was vastly important, and that he did. Tom was awarded the Army’s Meritorious Service Medal for “the outstanding operational skill and insight in command, control and communications of the 18th Corps Finance Group at Fort Bragg”. This was as he was performing his role as Operations/Intelligent and Executive Officer over a two -year period associated with “Just Cause” in Panama and “Dessert Storm/Dessert Shield” in Iraq. A parachute jump injury left him managing operations in support of the deployed forces in the theater. This led to the Finance Corps selecting him to join the Department of the Army. His work was recognized by having his writings published in the Army’s Resource Management Journal. As a result of his success at Fort Bragg, Tom was promoted to Lt. Colonel and sent to Command and General Staff College to become a Resource Management Instructor and so began his teaching career. Tom retired from this position in 1993, but that was not the end of his time working with the army. Tom was hired as Director of Communications by the Association of Graduates at West Point in 1994. It only took him a year to be promoted to Vice President where he worked until 2010.

Upon his second retirement, Tom moved on to develop the Rensselaer Alumni Association’s website and data base. In addition, Tom and his wife, the former Charlene Thamsen, have established an annual scholarship which goes to a Rensselaer HS senior who exhibits a true passion and aptitude for IT. The first of this award was granted last year.

Tom was nominated by his wife Char. They have lived world-wide and now reside in Richford VT with their daughter Christy and beloved dog Iggy.