Old Business: Motion was made to approve the April 2019 meeting minutes into the record by Doris Roberts and seconded by Deb Reimann. Motion carried.

Sign and Memorial Day Parade: Deb Reimann cannot attend the Memorial Day Parade so there will be no representation this year. Deb is working with John Mooney regarding the sign and indicated that a list of organizations participating is forthcoming and still in process.

Hall of Fame (Lynne and Ginny) -It was agreed by all that the venue change was a huge success. Food, beverage and staff was top-notch. Doris made the suggestion that perhaps for next year we could include the beer and soda into the cost, but that would mean that we would have to raise the price per person. The fund raiser turned out great and Ginny reported that the Alumni Association took in $5,485. It was mentioned that being able to set up on Friday morning was a plus and also that we may need more speakers around the room and for the computer next year.

Golf Tournament September 8 at Fairways of Halfmoon (Doris reported in Gerry's absence) – Gerry, Norm Van Wormer and Frank Bruno will be meeting the following week. Breakfast and an early dinner will be included. The signs for the tournament should go up around the first of July. Lynne mentioned to Tessa about the possibility of offering a paint & sip to those in attendance. 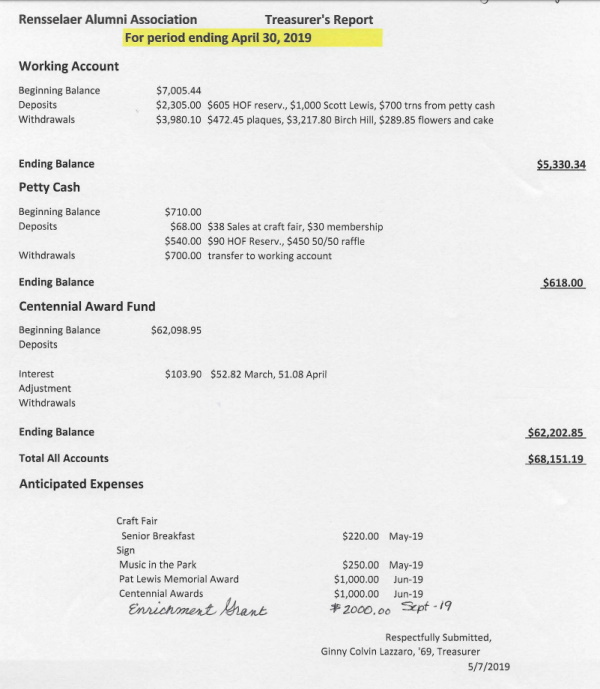