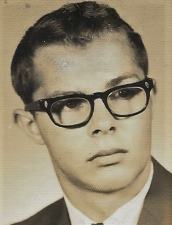 Robert “Pat” Lewis is being inducted posthumously into the Hall of Fame for his contribution to the foundation and continuation of the sport of football and his infamous football career.

Robert Patrick Lewis was known to all in high school as either “Pat” or “Scoop”. Pat was in the class of 1967. His elementary years were completed at Fort Crailo. The football program had only been in existence for a few years when Pat joined the varsity team his Freshman year and played the next two as well. He was in Varsity Club junior and senior year. He won the “Most Valuable Player” award for football his junior year. Pat aged-out of the requirements and couldn’t play his senior year. His junior year he made the All-Suburban Team for his position, full back, as well as winning the “Area Football Scoring Championship” award. He had broken nearly all the running records of the school. He claimed the Section Two and Capital District scoring titles for most points scored in one season. He also set records for the most points as a full back (82), most touchdowns in one game (4), most touchdowns in a season (13), most yards gained in one season (700) for a respectable 87.5 average.

Pat shared his love of football by becoming a founding member of the Rensselaer Men’s Athletic Association, which brought Pop Warner Football to Rensselaer. He also coached Pop Warner for many years.

Pat was nominated by his classmate and friend, Joseph Branion and couldn’t be here tonight. His son Scott is inducting him. Pat married his high school sweetheart, Judy LaPorta and they raised their four children, Paul, Scott, Brian and Amanda who gave them 12 grandchildren. All four of them are alumni. Both Pat and Judy passed away in 2011. They lived in Rensselaer all their lives.